The Taming of 'The Flicknife'

While I was working on Flicka's RAW poster for this year, it made me think how different she is now to a year ago.  Think you know me?  Yeah, I think I'm kind of beginning to, Flicka... 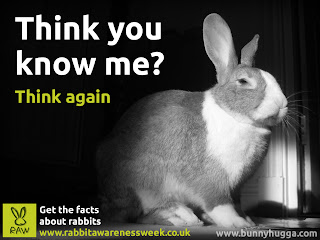 'The Flicknife' nickname initially stemmed from her driving need to know what we were doing at all times of the day.  She literally stalked us, watching, considering, trying to figure out her place in this little family group.  She terrorised us... in a good way.  It is only in the last month or so that we've felt comfortable enough about her to shut the bedroom door at night and restore our sleep patterns to normal; she's finally found her place and is happy in it.

From the start she was a friendly, playful rabbit but with a considerable amount of skittishness.  This is completely understandable, her previous life consisting of 6 months at the SSPCA rehoming centre, preceeded by an unknown amount of time as a stray, preceeded by... who knows?  But most likely the usual - bought as a child's pet, given up on.  I can think of few rabbits less suitable for a child's pet than Flicka; even these days it takes two of us to restrain her at the vet.  When threatened, she reacts with a ferocious strength that is all the more surprising given her sweet, friendly nature.

So how was 'The Flicknife' tamed?  Free access to everywhere (which she took full advantage of, no corner left unexplored) lots of love, lots of attention, lots of toys, lots of talking nonsense to her in a quiet voice.  The usual things, really.  The reward for this?  More and more aspects of her personality being revealed.  For example, she's recently started 'singing' (chirping) to herself, usually while devouring a treat but sometimes just when she's snoozing or cuddling with Bailey.

Her relationship with Bailey is interesting.  Unusually for a girl, she is a very generous lover and one of my greatest joys of the past year has been seeing Bailey tuck himself in to her chest in the sure expectation of a good ear licking.  He adored his previous partner, Daisy, and was a willing slave to her demands but, in true 'diva doe' style, she rarely returned the favour.  I believe the loss of Daisy affected him more than he let on and he was also dealing with the glaucoma which eventually led to removal of his left eye last June.  Since then, he and Flicka have settled into a mutually loving and generous relationship which is really beautiful to see.

So, no more Flicknife... perhaps her new nickname should be 'Mother Hen'..?

Bunnyhugga.com is a complete rabbit information resource and non-profit site raising the profile of rabbits as pets.  Join us on Facebook
Posted by Unknown at 2:58 AM