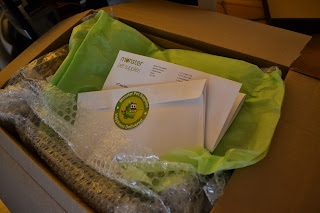 Bailey and Flicka received a big surprise in the post the other day, a package from the nice folks at Monster Pet Supplies.  After demanding that it be opened now, now, now, immediately... we read the letter (addressed to them, of course!) and set out the goodies for inspection.

First up, a Burgess Excel food bowl which Flicka declared to be "well posh".  I agree - very posh indeed.


Then, a bag of Country Value Fruity Nuggets and a quick scan of the ingredients to ensure there was nothing harmful (although to be honest, no dry rabbit food can be said to be 'good' for rabbits).  I gave them a few nuggets to try which were wolfed down with appreciative grunts from Flicka.  The rabbits only get an eggcup of nuggets each per day (Burgess Excel) and the Country Value is also made by Burgess.  The pack has good information on it (feed alongside hay, fresh water etc) and most importantly is a nugget, not muesli, so prevents selective feeding.  All in all, I would say this is a good, cheaper alternative to Burgess Excel but, like all dry rabbit food, should only be fed in small quantities.


Finally, a bag of Smartbedz bedding.  I have been wanting to try this for ages!  Even the sample pack (1kg) contained enough to cover the bottom of a largish litter tray.  Typically, Flicka tried to eat it but no worries - it's made from 100% natural straw so no nasties there.  It smells nice and is the most absorbent litter we've ever used.  Shame we don't currently have a garden as I bet this would compost really well.


Monster Pet Supplies have a great range of rabbit products, including hay, herbs, toys and treats and with free delivery on orders over £59 would be a great online store to buy in bulk from.  We give it the 'paws up'!
Posted by Unknown at 5:13 AM